Services // Toronto Movers who take the stress out of moving. 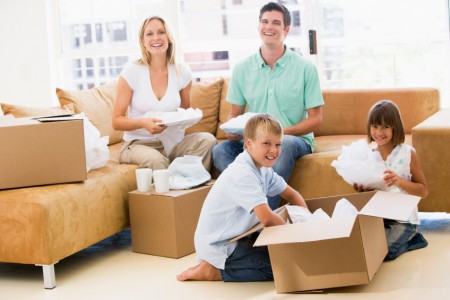 item in lightbox more about the item

The event of moving from one home to another is an extremely stressful and chaotic experience, especially for children and teenagers. For adults, it is much easier to make a transition. For children, relocating from family, friends, and familiar places can be trumatic, though it can be easily lessened.

For parents, moving is often the result of a positive change such as a promotion or raise. Children will rarely have this perspective. The old home is the center of their life, and replacing it with something unfamiliar threatens this center. The familiar faces, streets, stores and play area will be replaced with something foreign.

The move usually affects children from the moment they are informed about it until about a year after the move itself. By that time, they will become adjusted and comfortable with their new surroundings.

It is not necessary for a young child to be informed right away about the move. Tell them when it is absolutely necessary, but keep in mind that you should not wait until the night before to tell them either, or until they hear the news from someone else. Teens consider themselves adult members of the family, and they will likely take offence if they are not informed from the start.

Announce the move as a positive thing, and tell them the absolute truth. If you are moving to another city, tell your children how nice the city is, what there is to see and do there, and how friendly the people are. It's very important also to introduce your children to the Toronto Movers of choice so that they can take an active part in the moving process.

If you are moving to an area within a reasonable distance from your current home, take your children to show them your new home and let them choose their room if possiable. If you are moving too far to allow a visit by the entire family, take pictures, or even better, videotape the new house. Emphasize all the positive aspects of your new home, and be sure to include a demonstration of their new rooms with views from their windows.

In most cases, your child will be leaving behind sports teams, clubs, best friends, and favourite teachers. They will have to start all over again in a new place making new friends, becoming accepted and fitting in. Teenagers often have an even harder time adjusting, as they may have to leave behind a boyfriend or girlfriend. You will have to ease their fear of the unknown. Listen carefully and attentively to their worries and concerns and reassure them. For example, it is common for a child to be concerned about their box of toys to be left behind. Assure them that their box will be the first one in the moving truck in the morning. All Toronto moving companies should want to be helpful to the needs of your children.

Get your children directly involved in the moving process. You can allow them to pack their own room with your help if needed. If you will be redecorating their room in your new house, let them choose a color swatch for their new bed sheets, towels and carpets.

Throw them a party with the friends they will be leaving behind. Be sure to take pictures of everyone and make a photo album or save them on a device of your choice. If your child is old enough, allow them to take photos of the views of the outside and inside that they want to remember.

Expect that your child will be more distressed after the move than before it. For example, although everything might be in the house, the kitchen cupboards are bare, the clothes and towels might still be in boxes, and the furniture will have to fit in the rooms properly. Let them concentrate on putting together their own room so that they may create something familiar and comfortable. Do not let your child sit in front of the television or play video games. Encourage them to get outside so they can meet new friends. Remember that the newness will eventually wear off, and the "new home" will become "home." There will be discomforts, but in the end, everything will work out well.

* Courtesy of The Moving Store.